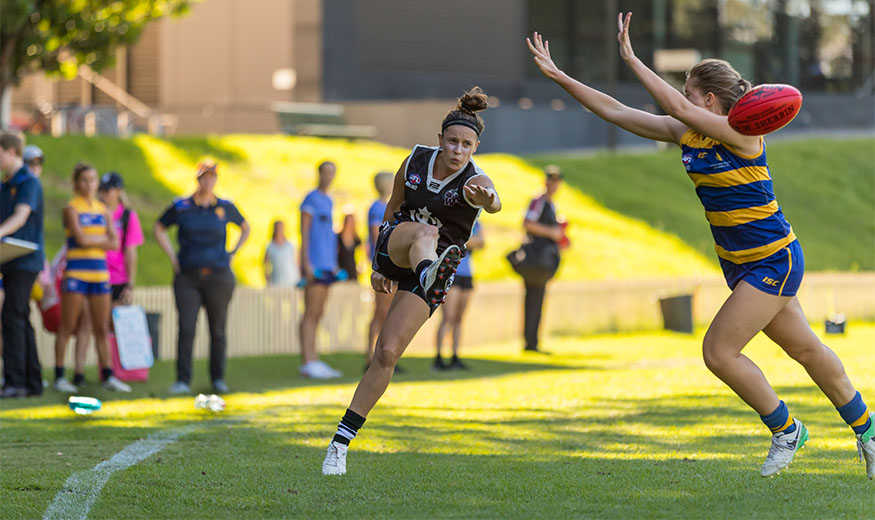 A massive upset was the highlight of the first round of the AFL Sydney’s Women’s Premier Division competition, which began over the weekend.

The Wolves led at every break and put the victory out of doubt in the second half when they kicked seven goals to the Bombers’ two.

Wolves captain and GWS GIANTS listed player, Melissa Freckelton says she couldn’t be prouder of her girls in what was a perfect start to their season.

“We went in as the underdogs, which we were happy with, and we think we’ve sent a little bit of a message that we’ve had a pretty big shift in our team,” said Freckelton.

“I think our girls are pretty excited to start the season off strong and hopefully we can maintain that and build on it.”

Freckleton attributes the transformation of her side to the development of their younger, less experienced players.

“We’ve retained all of those girls and they’ve got a season under their belt now and they’re more confident and they’re getting a feel for footy.”

One of those second-year players is full-forward, Jessica Urquhart who kicked five goals on Saturday.

Urquhart, who played the same position last year, only registered the one goal for the season. She has already smashed that total to become the leading goal kicker after round one. The former soccer goalie kicked most of her goals from strong marks inside-50.

“She’s so strong and just has the safest hands,” tells Freckleton.

“She played the same position last year, but we really struggled in terms of getting the ball into our forwards. It simply didn’t get into our forwards where our delivery into our 50 was just really solid on the weekend.”

Freckelton returned to the Wolves after spending the past five months training with the GWS GIANTS’ AFLW side and was keen to put what she had learnt over the pre-season into practice.

“My skills have definitely developed a lot. I felt pretty good out there, my hands and my kicking – it all felt good.

“I was really, really nervous. I felt like there was a bit of pressure. But as soon as got out there it was really fun. It was good just to have a run.”

Other GWS GIANTS, Erin McKinnon and Nicola Barr were missing from the depleted Bombers outfit. They will return to their local side once they have completed their post-season recovery program from the GIANTS.

The Western Wolves will look to continue their winning ways against the UTS Shamrocks this Saturday in the opening match of Round 2. The game will be played at Picken Oval at 8.30am.

Phoebe McWilliams is a current AFL Women’s GWS GIANTS player, who is also a freelance writer for publications such as Inside Football Magazine. Following the 2018 NAB AFL Women’s Season, McWilliams will be playing for the Hawthorn Football Club in the VFLW for the remainder of the year.