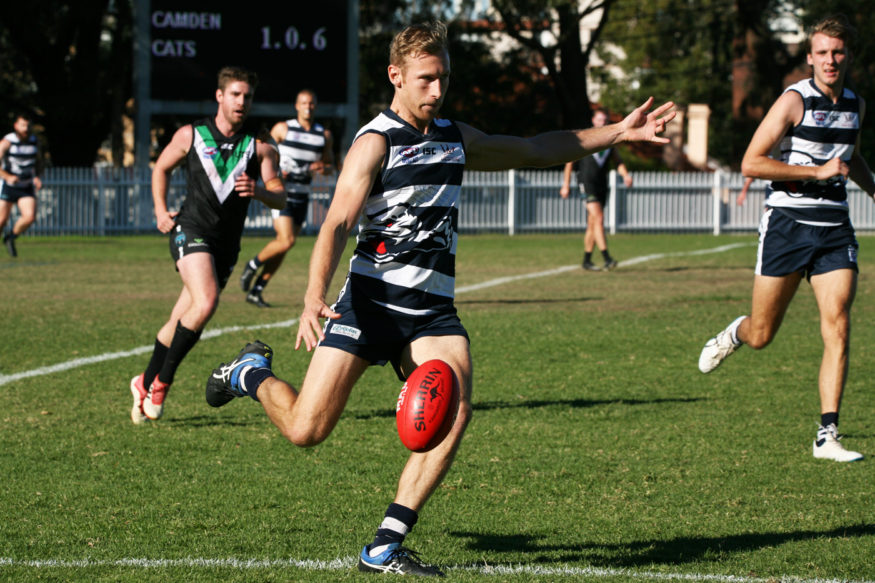 It was Bats v Cats at Waverley Oval as UTS played host to Premier Division newcomers Camden. The Bats went into the game with two wins for the season after victories in the first two rounds, and the Cats would join them with two wins on the ladder after coming from behind to record a 10-point win.

The game took some time to sort itself out, and the first quarter saw two teams sensing an opportunity and looking for a way to outgun the opposition. The Bats led by six points at quarter time after kicking three goals to two; but around the ground there didn’t look to be any great gulf in class between the two teams and it was looking set to be an absorbing contest.

UTS took the upper hand in the second quarter, stepping up around the ground and winning a greater share of the contested ball. While the Cats weren’t out of the contest, and managed to piece two goals together to keep themselves within striking distance; the Bats were looking the stronger team around the ground and a four-goal haul saw them come in at half time 16 points ahead.

The Cats were under pressure, but whatever was said in the rooms at half time had the desired effect, as it was the visitors who emerged looking better and they began to claw back the deficit. It wasn’t easy against a UTS side that started the quarter feeling confident and which had a strong defence that was hard to penetrate. But as the quarter drew on, the Cats were getting more of the ball; and eventually the goals would come. Three unanswered goals to Camden saw the Cats hit the front late in the quarter and take a two-point lead to the three quarter time huddle.

It was a thriller, and the UTS and Camden faithful watching were being treated to an enthralling contest that would continue to entertain throughout the last quarter. Four premiership points were on the line, and neither team was willing to concede these points without giving it everything they had. The fortunes of the game waxed and waned, the game finely balanced until the final moments. But it was the Cats, after a quarter that produced three goals to two, who would be holding the parcel of victory when the music stopped.

Fraser Brown, Joel Bottin-Noonan and Nick Hills were best for the Cats, as they recorded their second win of the season and kept themselves within reach of the top five in an increasingly tight ladder. After credible performances against North Shore and East Coast, to get a win in this game further re-enforces that the Cats are heading in the right direction in their Premier Division travels.

The Bats were well served by the efforts of Josh Moyle, Adam Tarrant and Peter O’Rourke. But they would be disappointed to drop this game, their third loss on the trot. It’s early in the season still, and there’s plenty of time to turn their form around; but they will be keen to stop this losing run from going any further.