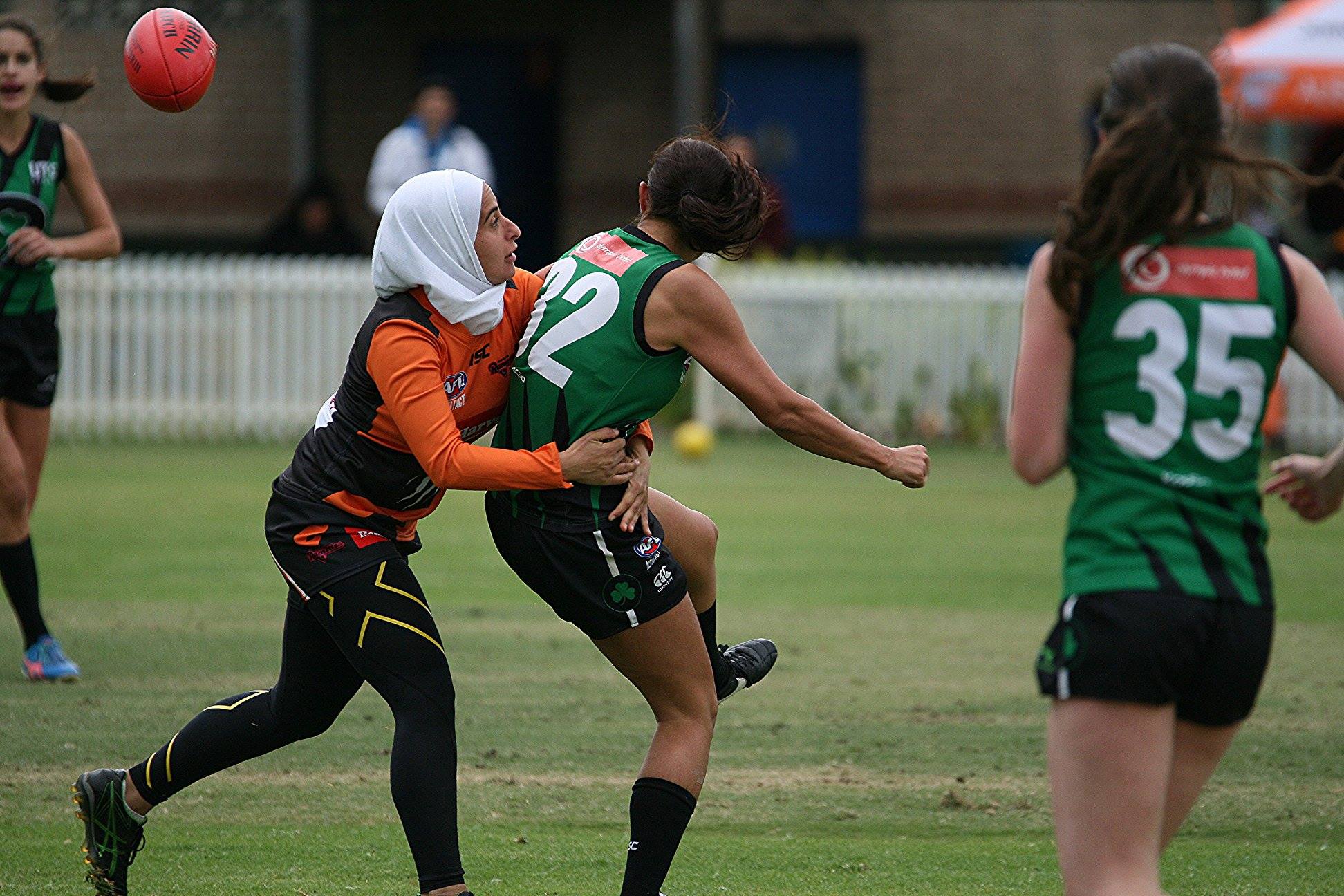 I have taken one bounce in my entire 12-year-career. I can recall when, where and why I took this said bounce. Fair to say it’s not common for tall forwards to take many bounces, however I cannot help but admire players who take a bounce and make it look easy.

Lael Kassem took many bounces on the weekend – I counted five in total. She was a standout in the Auburn Penrith Giants’ five-point win over the UTS Shamrocks. Her composure, skill and ability to hit up targets under pressure were one of the major reasons the Giants were able to come away with the win.

Last time these two sides met in Round 6, the Giants won by just six-points. This round’s match was just as close with less than a goal separating the two sides at the final siren.

The Shamrocks started the game in exceptional fashion, scoring a goal within the first two minutes. Deborah Geraghty bravely recovered from a heavy knock in the first 30 seconds to deliver the ball inside-50 to her forwards. Eventually the Shamrocks’ forward pressure lead to Elly Jenkins running into an open goal to put through the first goal of the game.

The goal must have kicked the Giants into gear as the ball remained in their forward half for the remainder of the quarter. The efforts around stoppages from Kassem, Haneen Zreika and Renee Tomkins gave their forwards plenty of opportunities. These three players all compliment one another. Kassem is a classy user of the ball, Zreika is an in-and-under mid who loves to take players on and put the ball on her left boot. Tomkins has a huge kick, which is great for gaining metres, and placing the ball in dangerous areas of the ground.

Shamrocks’ Una McKay did her best to stop the barrage of inside-50s but the Giants got their first goal through Nikki Perrett. Perrett got a free kick 40m out and played on quickly once she realised there wasn’t anyone manning the mark to slot the goal from 30m out.

The next goal was one of the best plays I’ve seen in the competition this year. From a boundary throw in on the wing, Giants ruck Paige Pirotta tapped the ball behind to Kassem who was on the move. Kassem took a bounce and delivered inside 50 to Kate Easthope. Easthope, who read the ball well and was playing in front, snapped around her body. The goal was a great way to go into the quarter-time break.

It was all Giants again in the second quarter. Melissa Brydon was a great target for them up forward leading strongly and using her body well. However, it was Kassem in the thick of it again who put through the only goal for the quarter.

The second half was a far more even contest. The Shamrocks’ Gillian Behan gave her side spark through the middle. At one stage she took the ball from the centre of the ground, handballed off to a teammate, got it back, ran and took a bounce, gave it off, got it back and put her side in a great spot to score. Following on from this play, the Shamrocks eventually got their goal through Emma Kirby. The Giants had a 10-point lead heading into the final quarter.

It was a perfect start to the final term by the Shamrocks. They were able to get the ball forward quickly. Through some great handball work in close, Kirby ended up with the ball again and had a shot on goal. The ball landed short and Natalia Hyland soccerred it through. That gave the Giants a four-point lead with nearly a full quarter to play.

The pressure around the ball increased leading to numerous stoppages across the ground. The Giants realised that they were in front and just needed to hold onto possession, chipping the ball around to wind down the clock. However, UTS had a couple of opportunities to go forward in the final minute, but weren’t able to get within scoring range. In the end the Giants held on to win by five-points.

Renee Tomkins was named best on ground for the Giants. This is the eighth game out of 10 that she has been named in the best for her side. Tomkins explains that the Giants went into the weekend’s game thinking anything was possible.

“The competition is unpredictable this year,” said Tomkins.

“We’ve seen teams on the bottom of the ladder come out with wins and typically stronger sides lose games. So we went in believing it’s anyone’s game.

“We didn’t play our best footy. We won the game and there were some good passages of play but we know we’re capable of playing better football. We had possession of the ball in our forward-50 and didn’t effectively transition them into goals. We need to learn and improve going into future games because opponents can capitalise on that and run away with the win.”

Tomkins has been playing in the ruck and working on owning that position.

“I’ve been working on my ruck work and contesting the ground ball. I’ve been focused on improving my resilience and maintaining focus and consistency across all games.”

They will need another big game from Tomkins when the Giants take on undefeated Macquarie University this weekend.

“Our coach led a good game review of our last Mac Uni game. We learnt heaps about our missed opportunities and we identified elements of their game that we can shut down. We need to be switched on for four quarters of football.”

Phoebe McWilliams is a current AFL Women’s player, recently signed by the Geelong Cats after two years spent with the GWS GIANTS. McWilliams is also a freelance writer for publications such as Inside Football Magazine. Following the 2018 NAB AFL Women’s season, McWilliams is playing for Hawthorn in the Swisse VFL Women’s competition in Victoria, while writing for AFL Sydney.