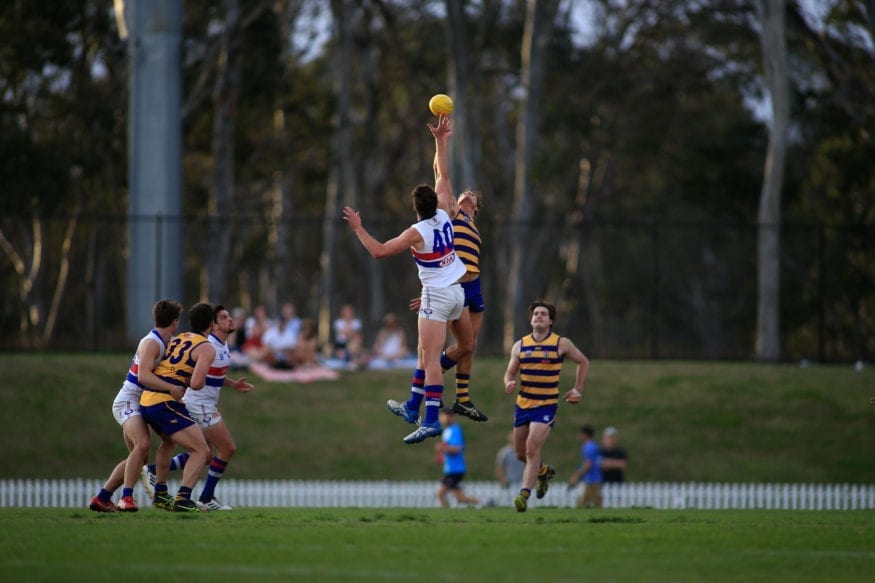 SYDNEY could be about to unearth a supersized draft bargain nicknamed “Beanstalk”.

The dearth of draftable ruckmen this year, including junior and state league ranks, is well documented, but the Swans are considering plucking a little-known former rugby second rower from obscurity.

Jack Blair – not 2010 Collingwood premiership player Jarryd’s 174cm brother of the same name, who played in the VFL for the Magpies this year – is the mystery man turning heads.

Blair, 23, had not played Australian football until this past season, and it was a fellow rugby convert, ex-Swan Mike Pyke, who set him on the path that could potentially see him on an AFL list next year.

Sydney is not the only club intrigued by the 205cm, 112kg ruckman, but he is training with the Swans ahead of this month’s drafts, along with Canberra Demons pair Mitch Maguire and Angus Baker.

Blair, who grew up in the Mornington Peninsula region in Victoria, qualifies as a Category B rookie because of his limited exposure to the sport, making him an even more appealing option.

Pyke’s involvement saw Blair, who co-captained Sydney Uni rugby club in 2017, train with the Swans Academy in the pre-season, when he was 10kg heavier than he is now.

The Swans then organised for him to play for AFL Sydney club UNSW-Eastern Suburbs Bulldogs, where he rapidly developed and eventually played in a Premier Division flag.

Blair also made one appearance for Sydney’s NEAFL side against Gold Coast and racked up 60 hit-outs, although he was predominantly against 194cm Suns Academy prospect Caleb Graham.

He was named in the Swans’ best players, adding five disposals, four tackles and two clearances, with his marking becoming a feature of his game later in the season for the Bulldogs.

Blair’s UNSW-Eastern Suburbs coach, Steven Pollock, who helped Jack Buckley’s ascension to the AFL last year with the Giants, believes he has the attributes to play at the highest level.

“He’s a diamond in the rough and his attitude and aptitude are his weapons,” Pollock told AFL.com.au.

“The Swans wanted to send him to a good club and he came to us. He started in the reserves and then we gave him a shot in the ones and his want to learn has been phenomenal.

“I rate him highly as a player, especially with the way he’s come on (developed). He demands the best from his teammates and he should definitely be on an AFL list.”

Among Blair’s teammates at UNSW-Eastern Suburbs this year were ex-AFL footballers Brandon Jack and Darren Pfeiffer.