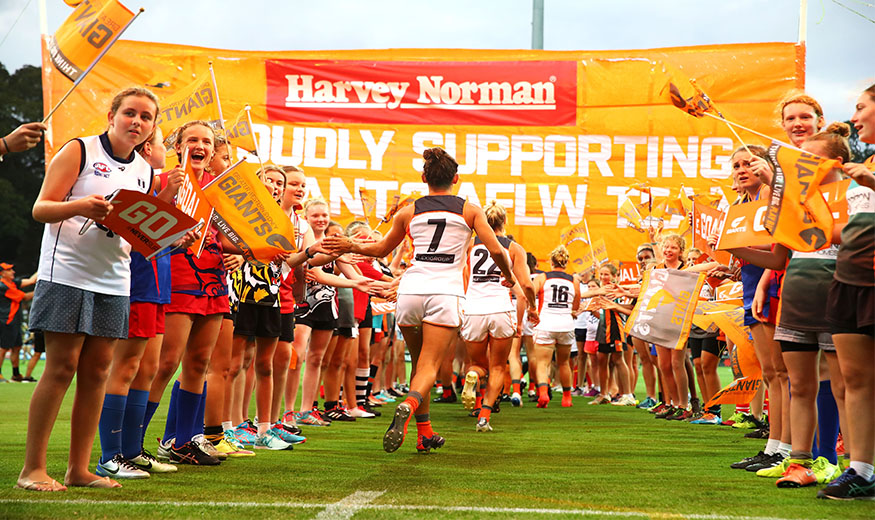 Arrive early and sit by the bay while enjoying a snack from the food trucks at Talpin Park. There are plenty of activities for the family, including inflatables and face painting and show your support for the GIANTS by creating your own sign to hold up during the match at our arts and crafts stall.

The Harvey Norman Hill is back again! 2019 AFLW Members have exclusive access to the Hill, which is complete with deck chairs, bean bags and cushions to watch the game in style and comfort. There will also be an exclusive giveaway – simply present your membership card to gain entry.

FREE orange snow cones will also be available next to the Harvey Norman Hill.

G-Man and GiGi will be out and about for our first home game of 2019 – catch them around the ground, or head over to our photo booth to get your photo taken with the GIANTS’ mascots.

Macca’s Kick 2 Kick on! Thanks to McDonalds, head on-field after the second siren and have a kick with your mates on Drummoyne Oval.

Harvey Norman. Harvey Norman has been a proud supporter of Women’s AFL in Western Sydney since 2015. Nationally and throughout Sydney, Women’s AFL has experienced extraordinary growth both in popularity and participation. Harvey Norman’s support has grown with the game, with the company signing on as Principal Partner of the GIANTS AFLW team – from day one. As this evening’s Match Day partner, Harvey Norman are delighted to welcome you to the GIANTS first home game of the 2019 AFLW season.​

The round two match will be broadcast live around the country on Fox Footy, and on 7Mate in NSW and ACT on Friday night, as well as being streamed on womens.afl.

The official match hashtag is #AFLWGIANTSNorth.