Men’s Premier Division MOTW: The Cats claw their way back 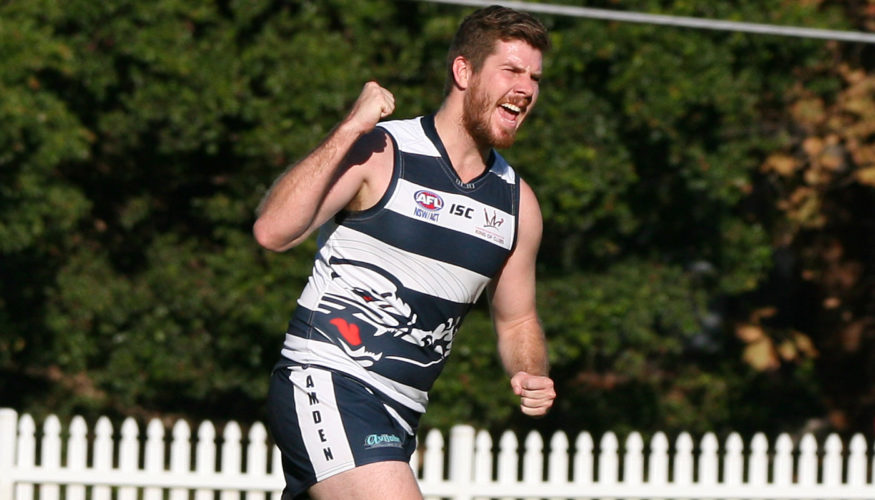 We’re already a third of the way through the home and away season, and the ladder is taking shape. Every week there are four points up for grabs, and for clubs who fail to take their opportunities, the season is at risk of already slipping away.

At Picken Oval it was a high stakes contest, as Inner West Magpies played host to Camden Cats on Saturday. The weather was fine, the ground was in good shape, and there was plenty of desperation on display in a contest that neither side could afford to let get away from them.

The Magpies have had a run of home fixtures to start the season, and were already playing their fifth game at Picken Oval. They had won two of their earlier fixtures, defeating Pennant Hills and UTS and were looking for a third to keep in touch with the top five.

The Cats had made the trip to the Inner West knowing they needed to hit the ground running. Bursting out of the blocks, they took control of the contest around the ground. The Cats enjoyed the bulk of possession, and the Magpies struggled to get the ball anywhere near their forward-50. Goals were hard to come by but the Cats took advantage of the lopsided stats to land the only three major scores of the first term, and take a 22-point lead to quarter time.

Much of the first term had been a defensive scrap. But the game opened up in the second quarter, and a more visually stimulating, free-flowing contest was unfolding. The Cats threatened to add further to their lead, but the Magpies hit back hard as the quarter unfolded. Runners were shaking their tags, forwards were creating leads and the scoreboard was ticking over. The Cats added four goals in the second term, but were outscored by the Magpies as they finished the quarter with a flourish to score six for the quarter. The Cats were still ahead by 10 points at the long break, but the Magpies were building momentum.

The Cats steadied at half-time and looked the stronger team in the third term. But some wayward kicking would prevent them from achieving the reward for effort they could have had. A return of 1.5 for the quarter was a waste of an opportunity that could have put the game out of the Magpies’ reach. The Magpies were well held during the quarter, but would manage one goal. When the siren sounded to end the third term, the Cats were 14 points to the good but the Magpies were still in the contest.

It was time to throw caution to the wind and go on the attack. The game was there to be won and an attacking mindset was needed. The Magpies struck, looking to regain momentum, but the Cats came up with the answers when they were required. For everything the Magpies tried, they couldn’t find a way to bridge the gap. Each team would score four goals in the last quarter, with the Magpies unable to complete the comeback and take the points as the Cats ran the game out for a valuable win.

In the end, the Cats took the game by 15 points. Josiah Ayling was magnificent on the forward line to finish with six goals and along with Baily McParland and Aaron Townsend, was among Camden’s best. The four-game losing streak is over, and the Cats’ unbeaten record at Premier Division level against the Magpies remains intact. But there’s plenty more to be done for the Cats to get back to within striking distance of the top five.

The Magpies had good service up forward with Ben Zoppo, who finished with four goals, while Jock White and Matthew Belbasis also featured prominently for the Magpies. The Magpies, like the Cats, are on two wins and four losses, remaining in sixth place thanks to their better percentage. But this was an opportunity lost to position themselves close to the top six.

In other matches in Round 6, Sydney University ended North Shore’s unbeaten run with a 20-point win at Gore Hill Oval. East Coast Eagles hit back after a slow start to overcome UTS by 26 points at Trumper Park. St George took the fight up to UNSW-ES for three quarters at Olds Park before the Bulldogs pulled away in the final quarter to win by 40 points. Pennant Hills were 75 points too good for Manly at Weldon Oval.

Which leaves a four-way tie for the ladder leadership with North Shore, Sydney University, East Coast and UNSW-ES all on five wins, a game clear of Pennant Hills. A gap of two games and plenty of percentage has already opened up between fifth and sixth and for the teams outside the top five, it’s time to make their move and string some wins together.