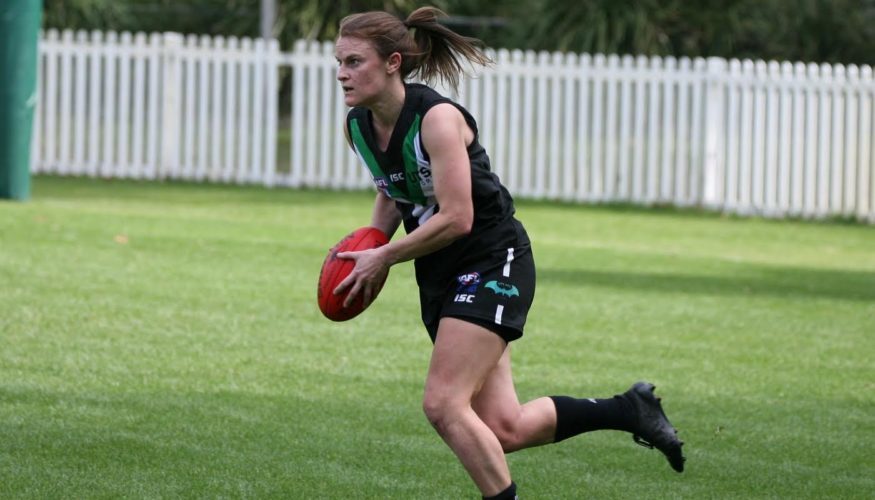 As the Women’s Premier Division home and away season passes the half-way mark, the battle for finals spots is heating up. For the teams that had a slow start to the season, now is the time they need to string some wins together to get themselves into the finals race.

And so the stakes were high as the UTS AFC Bats and Newtown Breakaways players made their way to the picturesque Waverley Oval on Saturday afternoon. Neither team had won a game in the first eight rounds. But here was the opportunity to break the drought and kick-start their 2019 campaign.

Both sides had been struggling for form, both were looking for something to spark their charge. And that was clear for all to see as they scrapped their way through the opening term. It wasn’t a term of footy for the purists, but there was plenty of passion and desperation on display. It was tight, it was tough, it was fiery at times. The Bats would score the only goal in the opening term, leading by four points at the first change.

Not much had separated the two sides in the opening term. But the Bats took the upper hand in the second quarter. Passes were finding targets in black and green jumpers, and running players who had struggled to make an impact in the first quarter began to make space. The Bats had found themselves a focal target up forward in Gillian Behan, shaking off any attention the Breakaways would give her as she led and marked with regularity. Four unanswered goals in the second term would see the Bats return to the rooms at the long break with a 28-point advantage.

The shadows were lengthening as the second half got under way and the Bats were taking longer strides with a spring in their step. Confidence was returning, the players had the nerve to back themselves in contests, as the run of play was going their way. It had been a long time coming, but the chance of victory was scented. They had the edge, and they weren’t letting go. The third quarter would continue the trend of the second, with the Bats emerging from packs with the ball and firing with hope into their forward 50 time and again. Three more goals to none would go the Bats’ way in the third term; and the Bats knew that victory was assured as they led by 45 points at three quarter time.

The Breakaways were shell-shocked, as the realisation set in that their winless run would last another week. They would finally break their goal drought in the final term, as Eilish Sheerin landed their only goal for the afternoon. But the Bats were unstoppable, and another three goals in the final quarter would extend the winning margin to 60 points. After waiting until mid-June to taste victory, there was plenty of noise and excitement after the game as the Bats finally got to sing the song.

Gillian Behan had been the star of the day, booting seven goals in a best-on-ground performance; while Carol Breen and Claudia Gunjaca also featured prominently around the ground for the Bats. Finally the first win of the season, and the relief was palpable. There’s still a long way to go to get back into the finals race, and they’ll need to turn this win into a winning streak; but the first step in the long journey has been completed.

It had been a tough afternoon for the Breakaways. Eilish Sheerin, Hayley Warren and Sarah Pittman worked hard all afternoon; but it was another of those days when little went to plan; and the quest for the opening win of the season will have to wait another week.

Other Round 9 results saw the top three continue to widen the gap over the rest of the competition. East Coast Eagles kept Inner West Magpies scoreless to record a 92-point win at Kanebridge Oval. Macquarie Uni avenged last year’s Grand Final result as they held UNSW-ES to a single goal at the Village Green to win by 84 points. It was a closer game at Waratah Oval, but Sydney Uni finally shook off the challenge from a determined Southern Power side to win by eight points.

After Round Nine the top three remain locked together on eight wins with only percentage separating Macquarie Uni, East Coast and Sydney Uni. Barring something remarkable, those teams will all make the top four with only two able to secure the double-chance in the finals.

It’s a tight battle for fourth spot. Southern Power sits there at the moment with four wins, ahead of UNSW-ES on percentage. Inner West are a game behind in sixth. UTS finally have a win on the board, with Newtown in eighth spot and yet to open their account in 2019.