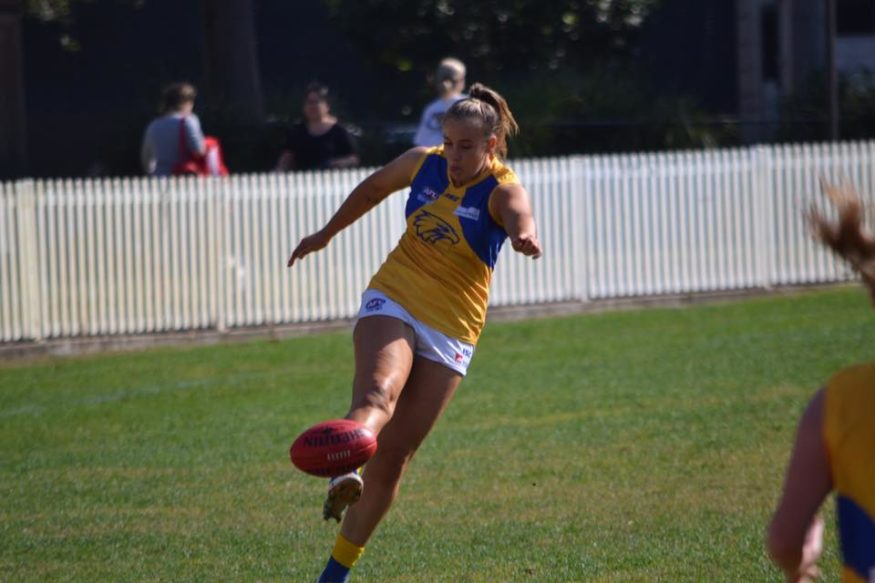 As the rounds ticked by, two teams had risen to the top in the Women’s Premier Division competition. Macquarie University Warriors and East Coast Eagles had been the standout teams, so when the two teams were scheduled to meet each other it was one to look forward to. And it didn’t disappoint, with a high-standard contest that would go down to the wire.

It was a sunny Saturday afternoon, and Macquarie Uni Oval was looking good. As the game got under way, both sides gave their big name players every chance to shine. An entertaining first quarter saw plenty of individual highlights, with some strong marks taken and the forwards making every post a winner.  The Eagles scored three goals to two, leading by six points at the first change, and it was looking like an exciting contest was unfolding.

The Warriors took the upper hand in the second term, kicking all three goals that were scored in the quarter. The running players were finding room to move on the spacious surrounds of the Macquarie campus. The home side was moving in harder under the packs and winning more of the contested possessions. The Warriors had a spring in their step as they returned to the rooms at half time, having played a strong first half of footy and being 11 points to the good at the long break.

Another goal would go the Warriors’ way in the third term, but the Eagles weren’t done yet. As the premiership quarter unfolded, the Eagles slowly but surely worked their way back into the contest. Players that had been barely sighted in the second term began to exert more influence over the game. Two Eagle goals would come, the margin cut to six points at three quarter time. A thriller was unfolding.

The Warriors had been in control for most of the day, but they were unable to add to their score in the final quarter. Their incursions into their forward 50 being consistently repelled by a resolute Eagles defence that rebounded the ball out of the danger zone time and again. At the other end, the Eagles kept coming until the Warrior defence cracked, leading to the only goal of the final term sailing through the big sticks. The Eagles had re-taken the lead and were desperately defending it against an aggressive Warriors team on the hunt for the winner. The Eagles manged to stand their ground until the siren finally rang. The Eagles had done it.

Just two points separated the teams in what had been a cliff-hanger. Caelah Stanley, Emily Goodsir and Renee Tomkins were outstanding contributors but there were many Eagles who played their role magnificently on the day. In their first season in the top flight, the Eagles find themselves on top of the ladder.

The Warriors had fought well, but on the day fell just short. Lisa Steane, Lauren Houghton and Amanda Farrugia had picked up plenty of the ball all day. The Warriors drop down to second on the ladder, but are still well placed to pick up the double-chance in the top four. They are likely to get a re-match against the Eagles when the Second Semi-Final comes around.

Around the grounds, Sydney Uni brought Inner West Magpies’ finals hopes to an end with a 32-point win at Sydney Uni No 1 Oval. Southern Power remain in fourth place after completing a 60-point result over Newtown at Waratah Oval. An eight-goal haul to Rebecca Privitelli powered UNSW-Eastern Suburbs to a comprehensive 73-point win over UTS AFC at the Village Green.

Three rounds remain in the home and away season. East Coast are a game clear on top, but Macquarie Uni in second place have a better percentage. Sydney Uni are a further game behind with the top three assured of playing finals. Southern Power are fourth, a game clear of UNSW-ES and little percentage separating them. Inner West, UTS and Newtown are out of finals contention.