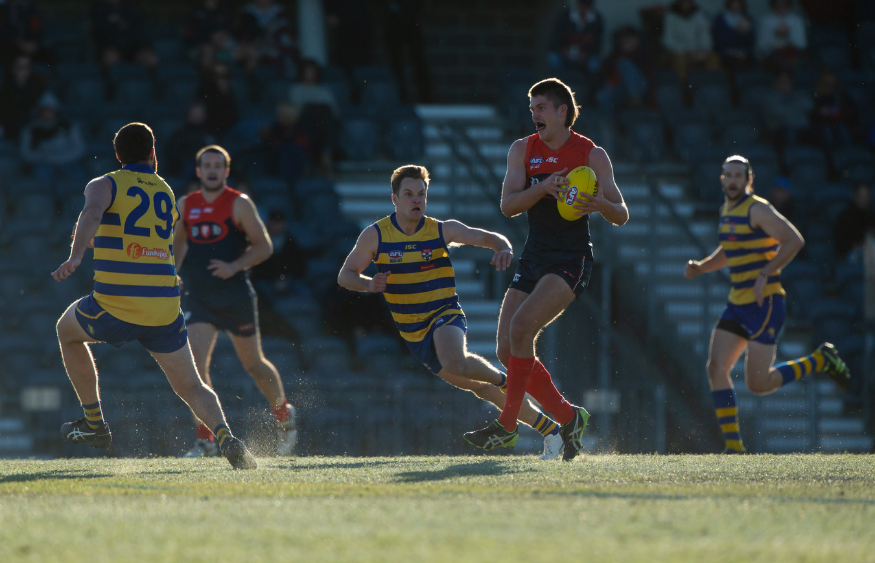 We’ve made it to the business end of the season, and premiership titles have been run and won. First off the blocks was the Men’s Division One Grand Final which saw Sydney Uni playing host to Pennant Hills in a twilight encounter on Saturday evening.

The same two clubs had just faced off in a Premier Division thriller and the Prems players stuck around to support their third-grade sides in a premiership decider.

But in the early exchanges, it was clear the conditions were going to play a major factor. A stiff cross-ground wind was making it near impossible to line up kicks, as ball after ball floated towards the outer wing with forward movement all but impossible as the wind picked up early in the game. Thankfully it eased up after the first quarter, but the first term was tricky to get any form of ball control going. There was little to excite in the tricky conditions, and incursions into the scoring zones were rare. The first quarter saw the Demons land the only scores of the quarter, two behinds; leading by that margin at the first change.

The Students broke the deadlock early in the second, the shadows lengthening as the wind thankfully calmed. The Demons were still struggling to control the ball, and some turnovers would cost them dearly as they were unable to get into their forward 50 nearly often enough to put the Students under any form of scoreboard pressure. And the Students made them pay, holding the marks when the ball went forward and adding two more goals to extend the margin to 16 points at the long break.

The Demons were still within striking distance, and they had their chances in the third term to close the gap and get back into the contest. Having rarely been anywhere near their forward 50 in the first half, the Demons were getting more of the ball and creating chances. But when it came to the crunch, their finishing would let them down; and for all their hard work they could only manage five behinds. The Students were under pressure in general play for much of the quarter, but made better use of their opportunities. They had a spearhead in Billy Lambert who was putting his hand up and taking responsibility for landing a winning score; something the Demons lacked at the critical moment.

24 points separated the two sides at the last change. It was still close enough for the Demons if they were good enough. But having not landed a goal in three quarters of footy, the gap seemed insurmountable. And so it would prove to be. The Demons would finally break their drought in the final term with two goals; but the Students had the answering goals to end any risk of the game slipping from their grasp. And so the Uni boys were on their way, taking out the premiership by 25 points.

Billy Lambert was a star for the Students, with Tom Whitaker and Ryan Kennedy also featuring prominently for the Students. It wasn’t a win that will go down as one of the classics, but the Students did what they needed to in tricky conditions and got the job done.

Stewart Hodges, Jordan Le Lay and Nathan Breen worked hard for the Demons all day. But the forward firepower wasn’t there for the Demons; and although they had some strong passages of play, particularly in the third quarter, the finishing touches weren’t there to get the result.

And so the Students prevailed. The first Grand Final had been run and won, and already there was more silverware to go into the Sydney Uni trophy cabinet.