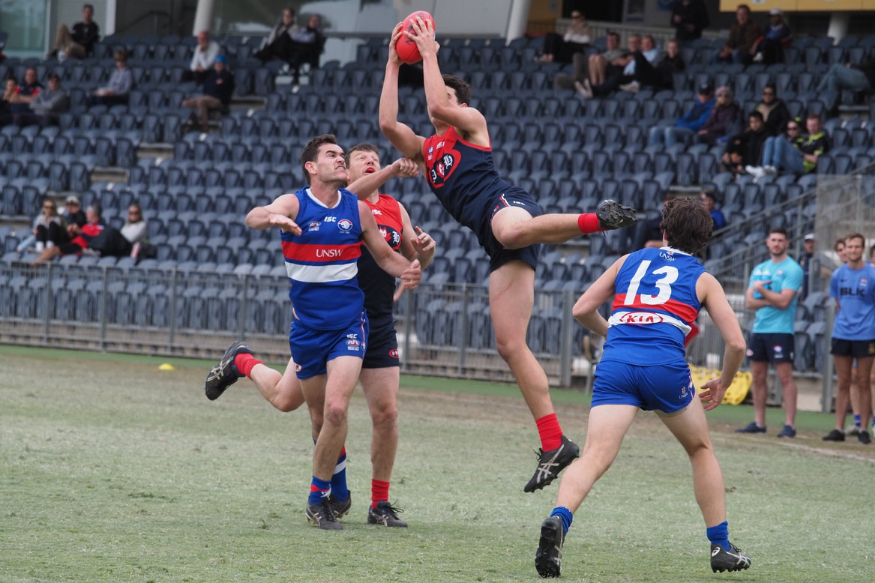 The Reserves Grand Final will be played at Blacktown International Sportspark on Saturday, with the first bounce at 11:10am. The match will see Pennant Hills Demons taking on St George Dragons.

The Demons finished the regular season in top spot, winning 16 of their 18 games with a commanding percentage of 304.68%. The minor premiership gave them a week off, going straight through to the Major Semi-Final in the second week of the finals. In that match, they were 14 points too good for UNSW-ES, earning themselves another week off before the Grand Final.

Experienced hands at the wheel have led the way up forward. Matthew Preen has led the goal kicking for the Demons, scoring 41 goals for the season. Anthony Brawn has accumulated 33, while Sam Zikman has managed 27. All three have been a part of the Pennant Hills setup for many years, with plenty of Premier Division experience; leading the way for their reserves this season.

Damian Dell’Aquila, another with plenty of experience at Premier Division level, has been a standout contributor around the ground, appearing on their best player list 10 times this season. Lloyd Shepherd and Matthew Preen have been named seven times, while Kieran Wright, Nathan Mace and Tim Scoular have appeared six times. With such decorated names who have achieved so much in Sydney footy playing Reserves this season, it’s no surprise that the Demons have been such a dominant force.

The Dragons finished in fifth place after the home and away season, winning 12 of their 18 games with a percentage of 136.80%; and have had to work hard to make it through to this clash. But they were able to hit their best form at the right time of year. A 62-point win over North Shore in the Elimination Final was followed up by a 46-point result against Sydney Uni in the Minor Semi-Final and then a 45-point win over UNSW-ES in the Preliminary Final. All their wins have been by comfortable margins, a reflection of the form they’ve managed to achieve at the business end of the season.

St George also have plenty of experienced hands who are no longer playing Premier Division but sticking around at the club to guide the Reserves to success. Daniel Napper has led the goal kicking this season with 37 goals, ahead of Declan Donohue with 31 and Zac Newton with 19.

David Lycakis, another who has played plenty of Premier Division footy, has been a ball magnet around the ground at Reserves level this season; and has been named among the best players 10 times. Daniel Napper and Campbell Andrews have also made valuable contributions to the Dragons cause with nine appearances in the best player list this season.

The two sides have met twice this season. In round 4 at Ern Holmes Oval, the Demons controlled proceedings from start to finish to record a comfortable 72-point win. But it was much closer for the return game in round 11, where the Dragons at home took it up to the ladder leaders and the Demons fell over the line by a point.

This time we’re on neutral territory. There’s plenty of big names in both sides who have achieved plenty in Sydney footy for many years and have continued to make contributions to their clubs even though they no longer play Premier Division footy. This experience has guided both teams through very different finals campaigns to make it through to the big one.

The Dragons have had some impressive form to make it through three sudden-death finals. But the Demons, having had two weeks to rest and recuperate, should be fitter and fresher; and their impressive form throughout the season doesn’t suggest they should drop this one.