With record numbers of boys, girls, men, and women playing AFL across the AFL NSW/ACT region, community Umpires have never been more important. For without the men and women in teams of bright green, there are no games, and no points on the board.

The Button family are one such team of Umpires who have been servicing local footy for years. A legacy worth three generations, the love of umpiring is a gene the Button’s are born with – a trend unlikely to buck anytime soon.

At 12-years-of-age, father of four, John Button started umpiring at his local football club in South Australia, while he was also playing in the junior competition. All these years later, he continues to run games as a Field Umpire, officiating the Division One and Division Two competitions for AFL Sydney.

“My father was a Boundary Umpire in the 1960’s in Adelaide, and he would often take me along to the games,” said Button.

“I loved playing the sport but I was always quite small, so I got knocked down quite a bit – umpiring was a way to stay involved without the risk.”

Button advocates for the fact that playing AFL and having a good knowledge of the game is not an essential part of becoming an Umpire.

“My daughters have never played Aussie Rules before, but they are both confident in what they do,” Button explains.

“I was a coach in the amateur league in Adelaide and I was looking to recruit young Umpires, when my daughters came to me and said – ‘Why don’t you ask us?’ – so that’s how they became involved.

“When they started in 2008, it was very male dominated. They were two out of 90 males, so it was an outstanding way to develop their personal self.

“They had to present themselves forward and this really helped to develop their confidence.”

One of John’s career highlights was seeing his daughters become the first females in history to umpire an Under 16’s SANFL Grand Final in Adelaide.

Button confesses that the family is quite competitive when it comes to keeping track of their fitness levels. Nowadays, John’s children are outlasting him consistently.

Button’s 15-year-old son, Paul is a young Boundary Umpire, and his 16-year-old son, Sam runs the boundary in the NEAFL Development squad.

The family made the transition from Adelaide to Sydney in 2014 and have felt welcomed by the umpiring cohort since day dot.

“We walked to the park the first Thursday we arrived, and we were welcomed immediately.

“There is a very strong social network that Sydney’s umpiring organisation has, which made the experience very enjoyable for us all.

“Strap your shoes on, come out to training at Blacktown or North Sydney, introduce yourself and give it a try.

“The umpiring team will provide plenty of support so if you have never umpired or played AFL before, they have a really good pathway for people to learn the game.”

AFL NSW/ACT Umpiring Development Coordinator, Pierce Field agrees with the sentiment of umpiring being for everyone.

“Anyone can have a crack – even if you have limited to no knowledge of football – the AFL will provide you with everything you need to get started,” says Field.

“Not only are you out and about being active, but it also provides you the opportunity to build friendships that can last a lifetime.”

For more information about becoming an Umpire, please visit their website. 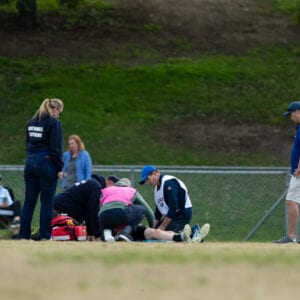 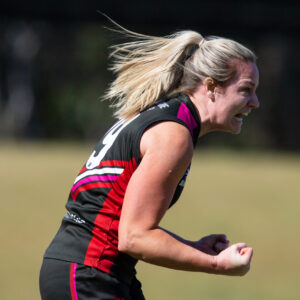