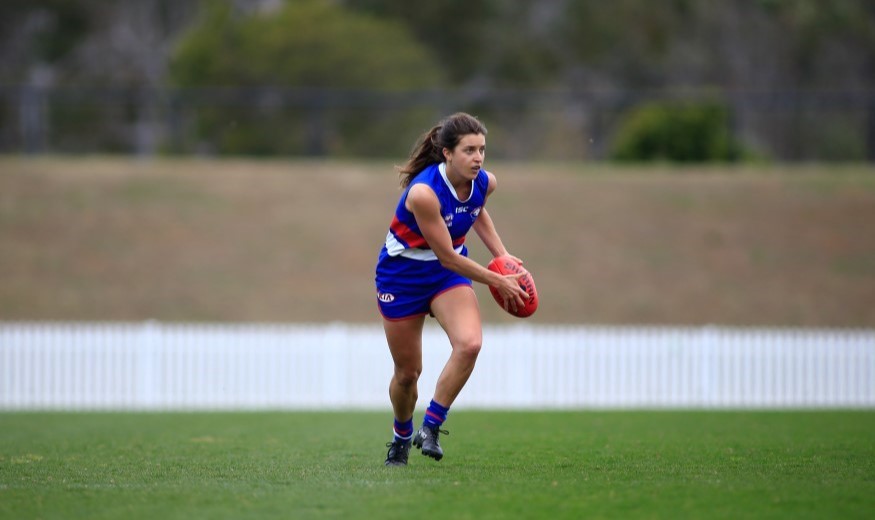 Sydney University and UNSW Eastern Suburbs both had something to play for over the weekend in Round 5 of AFL Sydney action.

The UNSW Eastern Suburbs Bulldogs were hungry for a win after last week’s loss to Macquarie University, while their opponents, the Sydney University Bombers, were determined to maintain their undefeated streak.

Both teams fought hard, but it was the home side that came out victorious after a tough battle in the goalless final quarter.

Following on from last week’s three goals, Rachael Stack opened the scoring for the Bombers in the first two minutes of the match, grabbing her first of two goals for the day.

It wasn’t long before teammate Maryanne Harley joined her on the scoreboard, also kicking her first of two goals just minutes after.

Despite the Bombers’ early lead, the Bulldogs were determined to keep in touch as they spurred into action, kicking their first goal of the game courtesy of Madeleine Kohlrusch.

However, they could not carry this momentum into the second quarter with the Bombers taking control of the match and rendering the Bulldogs scoreless at their end of the field.

Once again, quick goals early in the term from Stack and Harley gave the home team an edge over their opponents that would prove the difference in the final stages of the match.

Aoife McDonnell also snagged a goal for her side and has now scored in both of her appearances for Sydney University this season.

The third term saw numerous opportunities for the Bombers to strengthen their lead, but the side failed to convert these moments into goals.

Peri Maniakas’ performance in the second half for the Bulldogs helped her side keep the Bombers goalless for the rest of the match.

Sandra Janjetovic bagged her first goal of the season in the third, helping her earn best on ground for her side. Unfortunately for the Bulldogs, this would also be their final goal of the game.

Sydney University’s first-half performance proved its worth as they were able to hold their lead until the final whistle blew at the end of the fourth term.

Thanks to the efforts of Isadora Mcleay in defence, they prevented any late goals from the Bulldogs and ended any chances of a comeback for the away team. The Bulldogs struggled at the grandstand end of Sydney University Oval No. 1, unable to hit any six-pointers in that direction for the match.

Proving that last week’s performance was no fluke, Kristen Hay was awarded best on ground for the Bombers for the second week in a row.

It was a tough loss for the Bulldogs, particularly for Sasha Banki who was unable to secure a victory in her 100th appearance for her side.

This win leaves the Bombers as the only undefeated team in the competition, winning all five of their clashes this season and sitting comfortably at the top of the ladder.