The Sydney Swans unveiled a star of the future after 18-year-old Errol Gulden produced an outstanding performance in the Swans 31-point win over the Brisbane Lions at the Gabba on Saturday night.

The Sydney Swans Academy product finished with three goals and three assists from 19 touches and 10 marks in a dominant first game by the Sydney local.

Gulden was selected with pick 32 at the 2020 NAB AFL Draft after Sydney matched a bid from Geelong, securing the 18-year-old alongside fellow Sydney Swans Academy player Braeden Campbell.

Gulden grew up playing junior football for the Maroubra Saints in Sydney before joining the UNSW-ES where he was voted best-on-ground in the Bulldogs’ Senior Premiership in 2019.

Representing Australia’s Under-17 side in an Anzac Day clash with New Zealand in April 2019, Gulden was awarded the best and fairest player in Division Two of the NAB AFL Under-16 Championships in 2018 before starring for the Swans’ Academy in the NAB League and for the Allies in the 2019 Under-18 National Championships.

A NAB AFL Rising Star nominee will be named following each round of football in the 2021 Toyota AFL Premiership season.

The 2021 NAB AFL Rising Star winner will be awarded the Ron Evans Medal, along with $20,000 from NAB and a dedicated private banker. NAB continues to support footballers by recognising the junior clubs that helped foster the early careers of the nominated players.

Errol Gulden’s junior club, Maroubra Saints Football Club, will receive a NAB Club Recognition Award valued at $2500, comprising financial and practical resources, as a result of his Round One nomination. Since supporting the NAB AFL Rising Stars Program, NAB has donated over $900,000 worth of resources to junior football clubs through this initiative.

NAB has been supporting footy from grassroots to the elite level since 2002, providing boys and girls with a clear pathway from NAB AFL Auskick through the NAB AFL Rising Stars Program all the way to the big time. 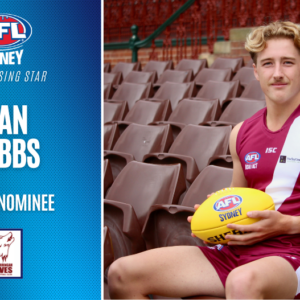 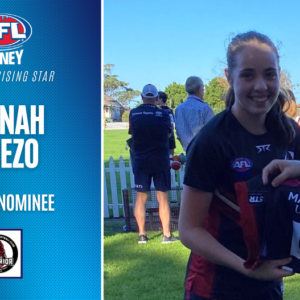