The East Coast Eagles scored the first win of their 2021 campaign in Round Three against the Camden Cats. This week’s Men’s Rising Star nominee was a major contributor in this win. Kyle Spencer has been going from strength to strength over the last two rounds being voted in the best on both occassions. Kyle has a massive hunger for the ball and is always eager to improve so we’re sure this trend will continue.

Learn more about our Round Three Rising Star Below:

Closely connected with both the U19 and Prems teams. Close mates in both teams.

Really committed to improving his game. Trains hard and always happy to assist with off field duties.

Enjoys having some time alone to focus on the coming game.

Playing his second consecutive game in the Prems team as an 18 year old. For the second week in a row, Kyle has been in our top 5 players. He is a local lad who has worked extremely hard to get a game at Prems level.

“Kyle has been in our best for two games in a row. He has adapted well to the speed of Prems footy. He has played forward and in the midfield. His strong attack on the ball and skill execution have been highlights of his recent games. Kyle trains hard and is always looking for opportunities to improve his game.” Damian Truslove 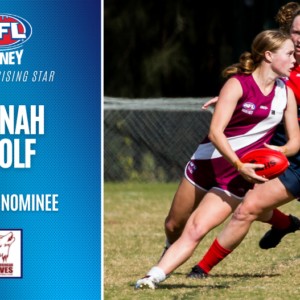